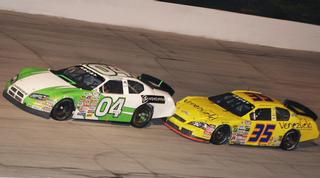 (Salem, Ind. - September 17, 2012) - For the ARCA Racing Series presented by Menards race at Salem Speedway Maryeve Dufault had her hopes set high. She was rejoining Carter 2 Motorsports, C2M, for the second time this year and was racing at a track that she has come to enjoy. Despite a rough qualifying run the short track lived up to her expectations until a late race run-in.

"We had a such a good run coming from the 27th starting spot and positioned myself in 8th out of the 36 cars after only 60 laps,” said Dufault, driving the No. 04 Dodge. “I didn't qualifiy like I wanted to because we had ran all our practice laps on old tires, but I knew I would move up quickly during the race.”

With running all her practice laps on old tires, Dufault and the C2M crew knew how to set up the car for the long green flag runs that occurred. The strong car was definitely noticeable as the underfunded team consistently ran with the front-runners.

While running on the lead lap in the 11th position halfway through the 200 lap, Kentuckiana Ford Dealers Fall Classic by Federated Car Care race the hard charging Dufault mistakenly hit the ignition switch while reaching for the fans, cutting off the engine and causing her to lose a lap. Once back up to full speed she strategically placed herself in position for the lucky dog. The team had another set back during the caution on lap 125, when the wrong set of tires were put on the No. 04 Dodge, causing her to make two pit stops during the caution.

“I couldn't believe how good the car was,” said Dufault. “I could go high and low, and when my tires faded away I knew how to adjust my driving from what I learned in practice,” said Dufault, who was saving the last set of sticker tires for a late caution. The team was unfortunately involved in the next caution.

After getting caught up in slower traffic, Dufault tried to carefully maneuver her way around the lap down cars but was struck on the left side by an overly eager lapped down car. The blunt move may have cost the competitor a penalty from the ARCA officials but ended whatever strong run Dufault and the No. 04 team had going for them. The team would finish the night in 23rd position respectively.

“The No. 35 car was a lap down and took me out for no reason on the straight away. The move was so out of no where that it felt intentional, almost like I was his target, because he wasn’t even going for the win,” said a disappointed Dufault. “I am happy that ARCA took it seriously and gave him a penalty but it still ended our night, which was unfortunate for the whole team.”

While the finish was a tough one to swallow for the team, owner Roger Carter couldn’t have been happier with the performance the Canadian driver gave.

“Maryeve did an awesome job,” said Carter. “She showed she has a lot of talent on the racetrack and deserves to be there. To run around 10th position all night at ta track like Salem speaks for itself. Maryeve and our team have great chemistry together and we are looking forward to great future success.”

Keep an eye out for the hard charger Dufault as she has an eye full of redemption to make in her next ARCA race.